Despite lots of upper body movement when they ride a sitting trot, skilled dressage riders maintain a surprisingly steady distance between their hands and their horse's bit. The details of exactly how an experienced rider moves with a dressage horse were explored by scientists using kinematic analysis.

Researchers analyzed six women riding at a sitting trot with the horse collected. The study looked at how each rider's shoulders, hips and hands responded while the same horse strode through the gait.

The scientists observed both similarities and differences in how the dressage riders moved with the trotting horse. As the horse's left forelimb lifted off the ground, the riders all tilted their upper body backward, bringing their hips closer to the bit than their shoulders. Then by the time the horse was lifting its right foreleg, all riders had shifted their shoulders forward so these were now closer than their hips to the bit. 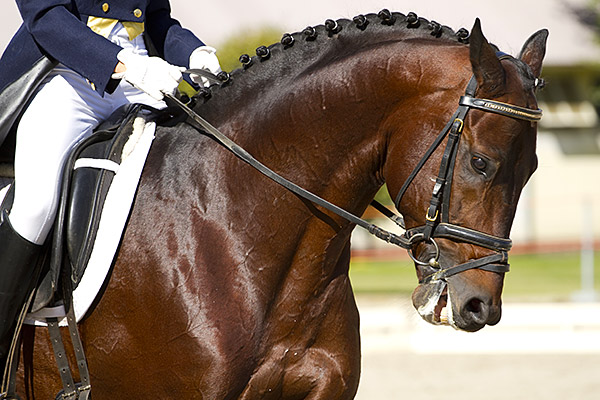 Skilled dressage riders move their body in harmony with their horse's gait.

Despite this common pattern among the dressage riders in how they moved with the horse, the extent that their hips and shoulders shifted during the horse's half stride still varied considerably.

Nevertheless, all riders coordinated their arms with the horse's movement. In doing so, they maintained consistent contact with the bit by minimizing any change in the distance from their wrist to the bit. Throughout the gait, the actual distance between the riders' hands and bit only varied by 1.5 centimetres (0.6 inches).